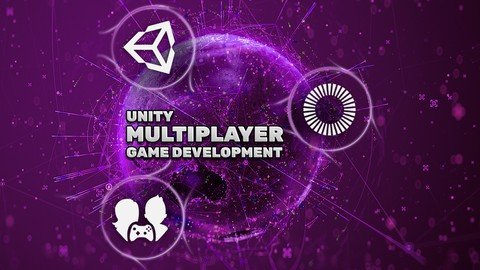 What you’ll learn
Multiplayer Game Development Basics
Mobile FPS Shooter Basics
How to use FPS Hands and Full Character Model together in multiplayer FPS game
How to synchronize player movement, health and animation for all players in the same room
Adding Mobile Controls For FPS Games
Requirements
Beginner-Intermediate Unity
Intermediate C# Experience
Desire to learn Multiplayer Game Development
Description
Have you ever wanted to build your own multiplayer games that hit the stores like Pixel GUN 3D, Golf Clash and ShadowGun Legends? Yeah, you’ve come to the right place!Because all these successful games are built using Photon which is a multiplayer game engine trusted by hundred thousands of developers around the globe!In this course, you will learn the basics to create your own multiplayer games! And in every section, we will build a multiplayer game from scratch! So, you will learn by doing in every project…In the first section, we will build Pixel Gun 3D Clone project from scratch with Photon Unity Networking 2 (PUN2).It will be your first multiplayer game. By building this game, you will learn lots of things:Creating and joining a random rooms with Photon.Instantiating remote players in the same room.Synchronizing Player movement and player health across the network.In the second section, we will build a Mobile Multiplayer FPS Game from scratch with Photon Unity Networking 2 (PUN2).In this section, you will learn more advanced stuff in multiplayer games.How to create rooms by name and max.players.How to list the existing rooms.How to list the players in the room.How to synchronize player animations across the network.First Person Shooter basics like FPS Hands and 3D player models.Mobile ControllersBasic re-spawning mechanism after the player got killed!In the third section, we will build Multiplayer Racing Game from scratch with Photon Unity Networking 2 (PUN2).There will be more and more advanced stuff and you will have the opportunity to practice what you learned.How to work with Scriptable ObjectsHow to sync Projectile Shooting over the networkCharacter SelectionGame Mode SelectionRaise Events Player Ready MechanismAnd more..So, come and join me on this Multiplayer Game Development Journey! Lets build together!-Tevfik