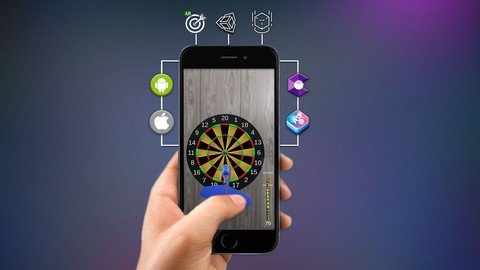 What you’ll learn
Learn Augmented Reality (AR) from scratch with Unity2021.
Build a AR Dartboard game in which players throw small missiles, also known as darts, at a circular target, known as a “dartboard”.
AR game design and game development that will help you build your own games.
Step by step from scratch guide to AR app development till the publishing of the app.
App Monetization (Unity ads) covering Unity editor settings and Unity dashboard.
Learn how to create a production build with the right settings.
Step by step guide to publishing your app on Google Play Store.
High Level Overview to publishing your app on Apple App Store.
Guide to resolve different issues while publishing your AR app to Google Play.

What is this Augmented Reality Game is all about?

AR Dart is a Augmented Reality game in which players throw small missiles, also known as darts, at a circular target, known as a “dartboard”.
We will be using Unity game engine Augmented Reality(AR) capabilities with AR Foundation to develop this app practically step by step. AR Techniques used in this project can be utilized in any of your project. So you can develop your own AR idea in a easy way.

What You Will Learn?

Setting up Project with AR Foundation

Adding a 3D Cube in AR and accessing a device camera

Restrict Scan only to Vertical Area

Place a Dartboard on the Wall

Restrict to Place a Single Dartboard

Instantiate a Dartboard and Throw a Dart and Load Next Dart

Each lecture is solving a subproblem and at the end we have complete project in a step by step practical way using these 32 lectures in this course. If you are a beginner who really doesn’t know how to create a AR app/game in Unity then this course will help you a lot. It can also help you in creating your final year project for your university or college. This course is designed for absolute beginners, but meanwhile, you should have a basic understanding Programming. The Unity packages includes Scripts or 2D/3D Assets are attached to the lecture in which they are used. You can download them and import in your practice project to match your project with course. The Scripts and 2D/3D Assets of this course is attached to the last lecture, and you can download that to use in your own projects.

This course benefit to:

Students who want to create a practical project using Unity latest version with C# from scratch.

Want to add monetization in your unity project.

Want to publish your first project to Apple or Google app Stores with practical knowledge.