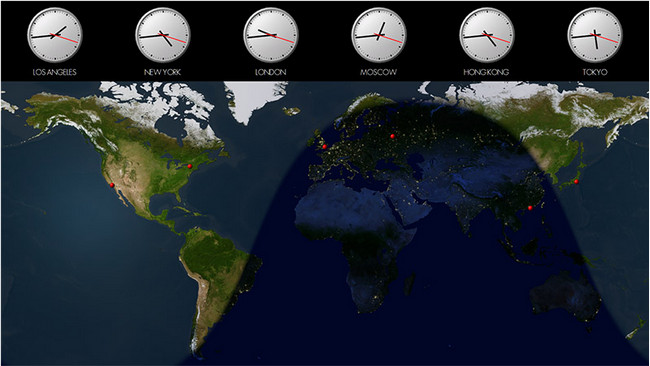 Solar World Clock is a small software application whose purpose is to help you gain access to a world map and view the local time for up to six cities simultaneously. User interfaceThe tool makes use of six analogue clocks in order to reveal the time for different locations from all over the world and gives you the possibility to examine a photorealistic map that shows the day and night areas around the globe.The best part about it is that this desktop enhancement utility can be run in a full screen mode. Configuration settingsSolar World Clock gives you the possibility to select the time zones that are revealed with the aid of the analogue clocks. You may choose between a wide range of preset locations, build up a list with the desired ones, remove the selected zones, as well as display city markers on the map so you can easily locate your favorite locations.PerformanceIt doesn’t come packed with many configuration settings, and for this reason even rookies can make the most out of every single built-in feature. During our testing we have noticed that Solar World Clock carries out a task quickly, and no errors showed up throughout the entire process. As it would be expected from such a small utility, it remains light on system resources, so it doesn’t hamper computer performance, nor interfere with other programs’ functionality.Where it falls shortOn the downside, there’s no support for features that could help you customize the clocks by choosing between different themes and set up reminders.Bottom lineAll things considered, Solar World Clock proves to be a straightforward clock and time management utility that comes bundled with only a few features for helping you view the time for up to six locations simultaneously. Home Page- http://www.solarworldclock.com/