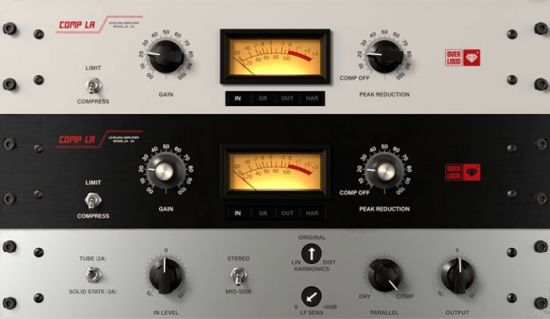 Overloud Comp LA is the revolutionary simulation of two legendary optical compressors into a single plug-in. The 2A version is tube-based and delivers a warmer, harmonically rich tone. The 3A version is solid-state based and has a faster attack, cleaner tone.

The 2A model has the electro-luminescent light powered by a tube, while the 3A uses transistors. Tubes can provide less current than transistors, so their response to attack transients is softer and has more harmonics due to the slight distortion introduced.

OPTO ATTENUATOR AND DUAL STAGE RELEASE
At the heart of the original unit there is a photo-cell coupled with an opto-attenuator, which are faithfully reproduced into the Comp LA plug-in.

The photo-cell provides a very natural dual-stage release which results in a very characteristic compression response, more transparent than that of other compressors