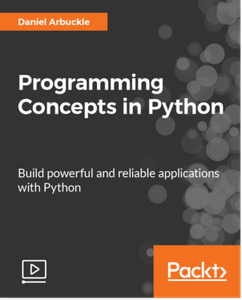 Whether if you’re new to programming or an experienced developer, it’s simple and easy to learn and use Python. Programming Concepts in Python opens the door to a career in programming, becoming a commercial application developer, or to using programming to support your existing career.

This course teaches the viewer Python in an engaging, friendly, example-driven way. In this course, we cover computer programming using Python. We start by running a “Hello World” program, followed by the discussion of fundamentals, such as common data structures, working with strings, and program flow controls. Later, we focus on writing modular and reusable code, using functions.

After getting familiar with the basic concepts, we delve further by covering Object Oriented Programming, errors and exception handling, and working with files. We also discuss Python standard libraries and external libraries. Finally, we provide future directions and next steps for avid learners keen to take their skills to the next level.