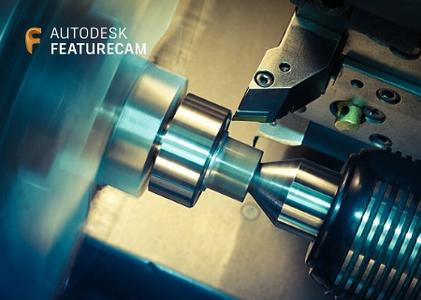 Simulation
– Fix a bug in which machine simulation could fail if started with the single-step rather than play button.
– Fix a problem in which the stock could be displayed in the wrong location depending on which setup was active.
User Interface
– Fix a bug in which the pattern options for OD holes in the ribbon were more limited than the options available from the feature wizard.
– Fix a bug in which minimized document windows could not be restored from the task bar if multiple documents were open.
– Fix a bug in which single-stepping in the simulation toolbar did not work if the mouse was not in the blue portion of the icon.
– Fix two issues with the geometry edit fields: one in which entering the decimal point moved the cursor position, and one in which the fields sometimes disappeared when tabbing between them.
– Restore the “Update Now” button from the 2017 toolbar interface by adding it to the toolbar at the top of theOperations List in the Results panel.
– Fix a bug in which arcs and lines could no longer be selected when picking a curve.
– Fix a crash that could occur if invalid values were entered in the Polygon curve creation dialog.
Toolpaths
– Fix a crash that could occur if the minimum corner radius for finishing was not set.
– Adjust an internal tolerance to correct a problem in which very small arcs might get simulated as full circles.
– Adjust an internal tolerance that could result in some selected surfaces failing to be considered in surface milling operations.
– Fix a problem in which the Post Variables page of the Machining Attributes was not initialized properly, which resulted in changes to the post variables not being visible during posting.
Tools
– Fix a bug in which values entered in the overrides tab were not properly updated when switching between tabs.
Addins
– Fix the FeatureCAM to Camplete addin which was failing to load into the application.
Import
– Fix a problem that caused a confusing “Switch To / Retry” dialog to appear when using the Inventor Server for import.
Crashes
– Fixes for several additional crashes reported via Customer Error Reports are included.

About Autodesk FeatureCAM 2018. The updates to FeatureCAM 2018 are significant, including the updated ribbon-style user interface. This change enhances the look and feel of the software. With an icon, accompanying text and dynamic help, users will have easy access to the tools they use most often as well as more visibility and insight into different functionality they may not have known was available within the software. Finally, the layout of the ribbon is customizable so users will have the option of creating their preferred working environment.

Beyond the user interface, the updates to functionality are also pretty cool:

– Automatic toolpath angle: users can now quickly fine-tune the angle for their parallel finishing toolpaths, based on the region that is being machined and create more efficient toolpaths from multiple surfaces.
– Automatic 3+2 positioning: New automatic 3+2 positioning allows users to use the axis limits of the machine to quickly determine whether the axis needs to be in a standard or an alternate position, which helps validate that the program is within the machine’s working envelope.