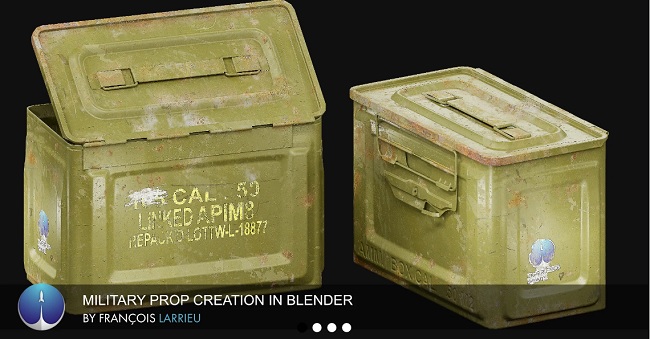 Info:
Blender has become one of the most popular tools for creating 3D art and best of all, it’s free! It’s incredibly versatile, used in many industries and has a large plethora of addons thanks to it being open source. In this tutorial François Larrieu will guide you through his full creation process of producing game-ready military props including gathering and studying reference material, modelling in Blender, creating a detailed high-poly mesh with ZBrush, texturing with Substance Painter and Photoshop as well as presentation in Marmoset Toolbag.

THE ARTIST
François Larrieu is a 3D Artist from Paris currently working as a Contract Artist at Dekogon and Switchboard Studios. François has made a name for himself by crafting some of the most intricate and detailed hard-surface props out there and famous for his unique orange renders. François has also previously created an Experience Points article on The “Marie-Louise” where he shares more of his asset creation techniques.