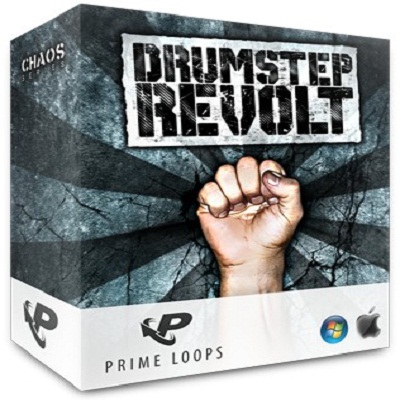 Let’s get our skank on to sum half-time riddims! Join the Drumstep Revolt and skank all the way to the drop with some seriously slow tempo beat structures fresh from the Prime Loops lab! We’ve immersed ourselves in this subgenre of DnB to deliver this essential hit of Drumstep samples.
This half-breed genre is a hybrid of elements with the half-time swagger and wobble of Dubstep buried deep in its DNA, fused with the general frantic tempo and heavy cadences of Drum n Bass! Heavy half-time beats create a stark contrast to all other elements of the mix which stick religiously to the faster tempo. Drumstep’s origins can be traced to the sounds of Dub Foundation, Heist, Hazard, Original Sin and Taxman and this incestuous sound is also evident in many remixes by Dnb and Dubstep producers.

Crashing into your DAW with over 190MB of brand skankin’ new Drumstep samples, this pack delivers over 170 individual files arranged across 5 folders for quick and easy navigation. Grab your Bassline Loops, Drum Loops, Drum One-Shots, SFX Loops and Synth Loops from your download folder and fling any of these crystal clear 24-bit samples into your mix with a straightforward drag and drop! Drumstep Revolt has been engineered to sync autonomously with any major software programme and you can adjust the tempo as you please without corrupting any of the original quality – simply click the end of the sample in your software and change the length to match your desired BPM. From the intergalactic whirr of robotic Bassline Loop ‘Harsh’ to the erratic stammering of chemical Synth Loop ‘Respo’, there’s plenty to stack on top of those pre-assembled half-time breakbeats or your own beat structures constructed from a phat selection of One-Shot samples!

So if you want a shot at leading the breakbeat mutiny, harness this primal crossbreed of a genre with sum heavy backup from Drumstep Revolt! We know you wanna make a living from your music, and why make half the royalties when you’re only using half the tempo? Prime Loops have got you covered, sending this pack out 100% royalty free, so you tear those sample clearance forms in half too!