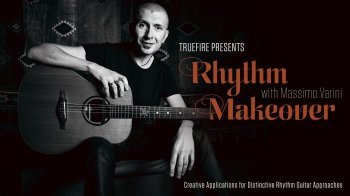 Thousands of hit songs, across almost every style of popular music, use the same handful of chord progressions. So, what makes those songs so distinctive from one another? Melody, lyrics, and production values are all very important, of course, but its rhythm, chord voicings, and right-hand techniques that set the groove and distinguishes one song from another using the very same chord progression.

”We’ll begin with three ways to approach the mother of all pop progressions, the one five six four. Next, we’ll work with a non-diatonic one, five, two major, six major progressions. We’ll work on three rhythm approaches for a jazz-influenced one, six, two five progressions.

Massimo will explain and demonstrate all of the key concepts and approaches along the way. You’ll get standard notation and tabs for all of the performance studies. Plus, you’ll be able to use TrueFire’s learning tools to sync the tab and notation to the video lesson. You can also loop or slow down the videos so that you can work with the lessons at your own pace. All of the backing tracks are included to work with on your own as well.

Grab your guitar and let’s dig in with Massimo Varini!