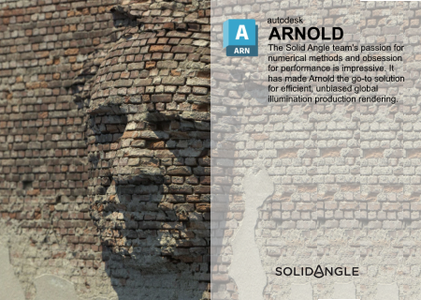 The Arnoldrenderer product team is pleased to announce the availability of Arnold (or HtoA) 6.1.3.2 for Houdini. This is a bug fix release using Arnold 7.1.3.1.

Arnold is an advanced cross-platform rendering library, or API, used by a number of prominent organizations in film, television, and animation, including Sony Pictures Imageworks. It was developed as a photo-realistic, physically-based ray tracing alternative to traditional scanline based rendering software for CG animation.

The Arnold architecture was designed to easily adapt to existing pipelines. It is built on top of a pluggable node system; users can extend and customize the system by writing new shaders, cameras, filters, and output driver nodes, as well as procedural geometry, custom ray types and user-defined geometric data. The primary goal of the Arnold architecture is to provide a complete solution as a primary renderer for animation and visual effects.

Arnold for Houdini (HtoA) provides a bridge to the Arnold renderer from within the standard Houdini interface. Having been in beta for several months, the plugin has already been used in production by many studios, including Prime Focus World for Hercules and Vampire Academy, Milk VFX for the Sherlock and Doctor Who TV series, and Framestore NY for the Captain Morgan commercials.

Teaser of the upcoming tutorials about Arnold for Houdini. I will be making a digital asset Arnold “uber” shader, showing how to make layered materials, explaining the general setting and at the very end texturing, rendering and multi-pass comping a Ferrari 458 Italia in NukeX. Available in 4k UltraHD
Solid Angle is leading provider of rendering software for animation and visual effects. The Arnold team believe that accurately and efficiently computing light transport in CG scenes is the best way to create stunning imagery for films and TV. Developers strive to provide clients with the best rendering tools to efficiently create realistic images.

Solid Angle is a wholly owned subsidiary of Autodesk Inc, and has its offices in Madrid and London.