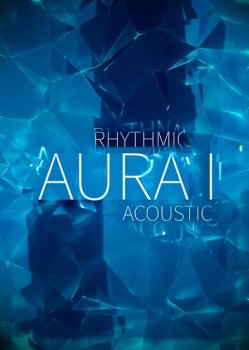 The New Rhythmic Aura Vol. 1 “Acoustic” library is a highly intuitive, yet advanced scoring tool designed to inspire and augment your compositions. The library is entirely made of custom acoustic source material made by Academy Award Winning composer, Troels Folmann.

The idea is to offer you an infinite amount of pulsing textures – that immediately creates a textural aura around your music and create a drive and pulse to it.

Complete Control
Rhythmic Aura is all about control – whether you want to change the pitch or tempo of the textural aura. We created the user-interface so you have instant access to a large assortment of primary controls, including 4-Band EQ, Custom Gate function that allows you to “tighthen” the sound of the aura. We also added Filters with Cut-Off and Resonation control. Full tempo-sync features, Dynamics, Attack, Release and a control that shows you what key you are in. It all works effortlessly. If you ever wonder where you’ve heard Aura – try most countless Blockbuster Movies, TV-Shows and Video Games

CHAOS FX Engine
Our FX CHAOS Engine is one of the most extreme feature in Rhythmic Aura. The FX CHAOS Engine allows you make over 1.500 sample parameters randomize with several easy clicks. Also controllable from the front faced FX section, our 8Dio FX system is a glorious cocktail of processed fun.

Real-time Effects
Rhythmic Aura also contains a massive amount of real-time effects that can be triggered via the effects page of the front faced effects macro system. We included Bit-Crusher/LOFI, Rotator, Delay, Reverb, Distortion, Phaser – and a large set of custom convolution reverbs that brings an entire new world to the textures.

Gating
Everything in Rhythmic Aura is designed to match your host tempo. All you have to do is play and you are all hooked up. The gate and several LFO’s syncs at a variety of assignable timings. These features become really powerful used together with our STACK/LINK button that allows you to merge multiple patches together and crossfade between them using out A/B features several simple clicks. Life is easier that way.