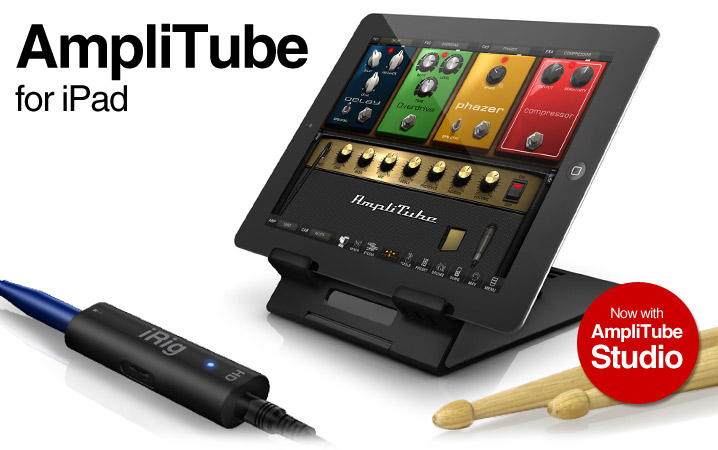 AmpliTube for iPad gives you incredibly realistic amp tones and effects, full recording processing and editing capabilities, a powerful programmable drummer for easy creation of drum parts, and a timeline-audio waveform editor and sequencer — all in a mobile app from the leaders in analog gear modeling software for professional recording studios.
The signal chain

To take advantage of all AmpliTube has to offer, you first need to get your guitar/bass/vocal/instrument sound into it. We’ve got some fabulous ways for you to do that, including the new iRig HD digital interface, the original iRig Guitar interface, the iRig STOMP “stompbox” style interface, and the iRig Mic, iRig PRE and iRig MIC Cast compact microphone. Once you have your signal going into your iPad, you’re ready to rock! 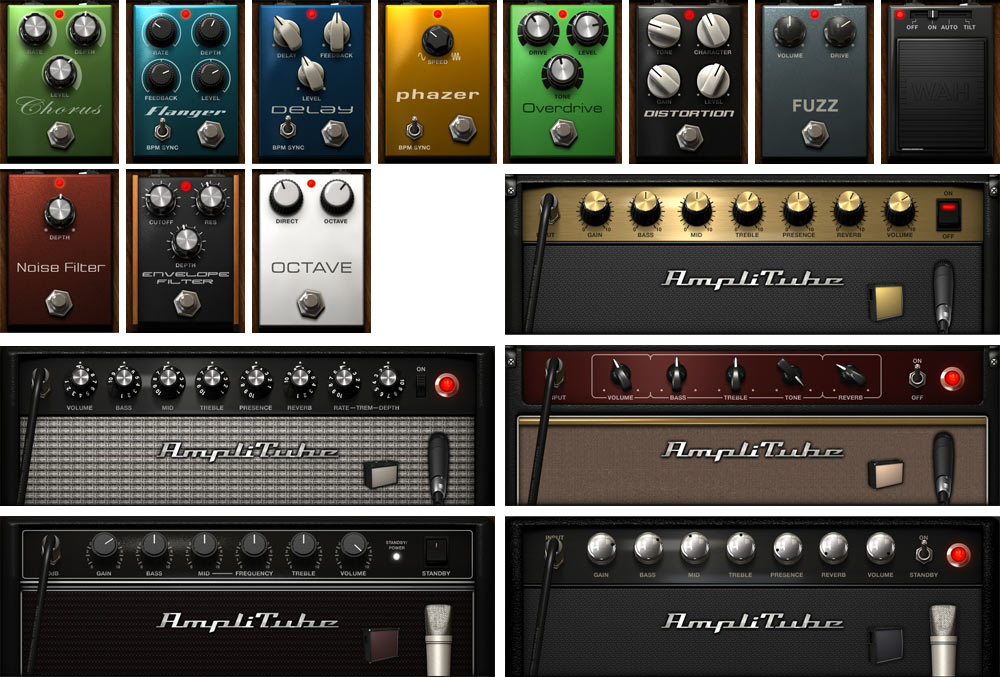 Your new favorite guitar rig — always with you

At its most basic level, AmpliTube for iPad is an incredibly fun, intuitive guitar and bass rig that allows you to jam anywhere with world-class tone. Just like a traditional live setup, you get a tuner, four stompbox effects running into an amp-head with effects, plus a speaker cabinet and a microphone. In itself, that’s a pretty amazing thing, but AmpliTube also offers you a full-featured expandable recording studio with a built-in drum module, a mastering suite, a timeline audio waveform editing studio plus some nifty tools to help you learn and practice your licks anywhere you go. Read on.
The gear 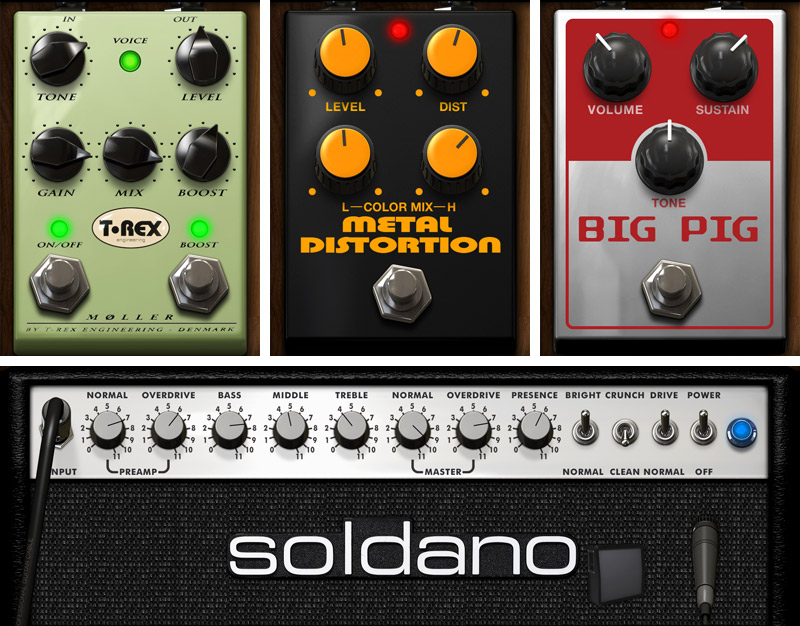 So basically AmpliTube includes everything you need to cover virtually any style of music. You can spend hours and hours creating guitar and bass tones with all the killer effects and amps that are included. But we couldn’t stop there…

So basically AmpliTube includes everything you need to cover virtually any style of music. You can spend hours and hours creating guitar and bass tones with all the killer effects and amps that are included. Now, here’s (yet another) cool part: You can also add more gear to your AmpliTube version via the in-app purchase system. Now you can add all the AmpliTube Fender® gear, the VocaLive vocal effects processors, the AmpliTube Slash and the AmpliTube Jimi Hendrix™ gear models for an amazing array of tones and effects, all on your iPad.

Now, here’s (yet another) cool part: You can add all the AmpliTube Fender® gear, the VocaLive vocal effects processors, the AmpliTube Slash and the AmpliTube Jimi Hendrix™ gear models, for an amazing array of tones and effects, all on your iPad. You can get entire collections, or individual models like the Soldano® “Super Lead Overdrive” SLO-100 and the classic Ampeg® B15R Portaflex “Flip Top,” the T-Rex Engineering® “Moller” Classic overdrive and more.

AmpliTube 3.0 Studio:
A recording and editing studio — always at your fingertips

Capture your ideas quickly by recording your performances with the built-in recorder, edit to perfection with the new optional Studio timeline-audio editing suite, then share your track by exporting high-quality WAV or m4A files.

AmpliTube for iPad comes with a built-in single-track mixer/recorder that you can expand to a full-fledged professional multi-track studio by adding the 8-track recorder plus master effects section (available as in-app purchase) which is all housed in an ultra-cool vintage style “reel-to-reel” recording interface. The recording mixer gives you full track control including mute, solo, pan, level, dual sends (into the master effects section) providing you with a powerful yet incredibly intuitive way to record.

What’s more, the new AutoFreeze feature allows you to “freeze” the effects on a track (in other words, write them to the track), freeing up AmpliTube’s effects engine to use on another track, which can then be frozen and so forth. As a result, you can have full effects on every track. And if you want to go back and tweak an effects setting, no problem, you can “un-freeze” the effects on a track to make your adjustments. 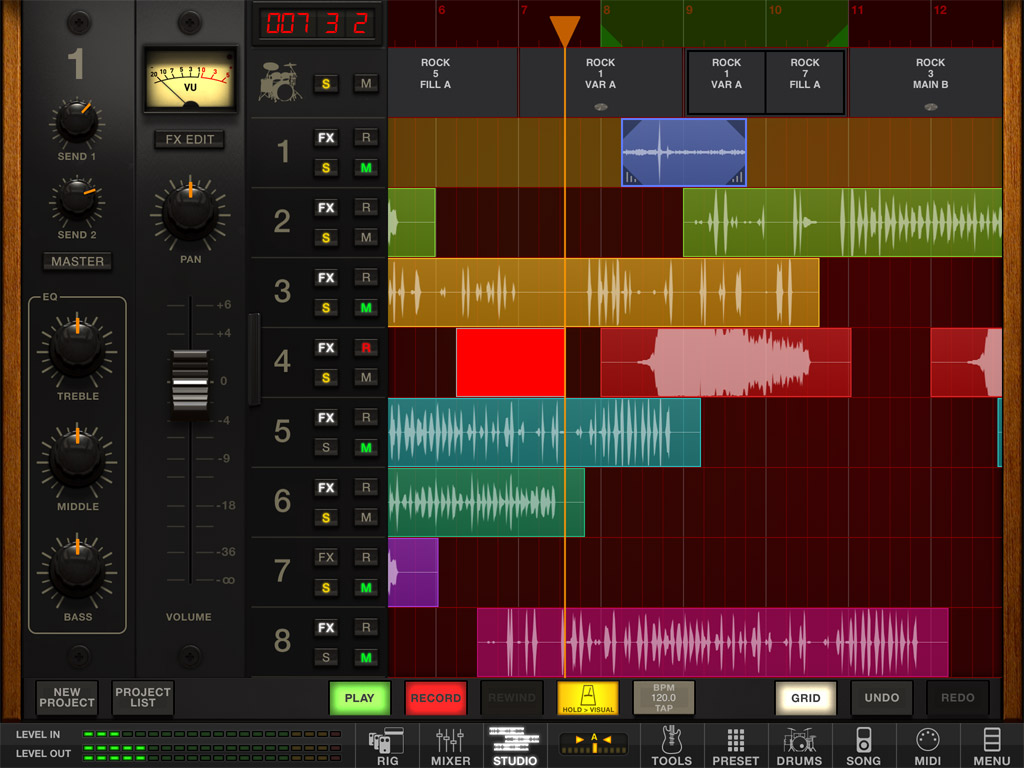 The new AmpliTube Studio feature (available via in-app purchase) gives you a full professional editing suite with DAW-style waveform audio region editing and production tools, plus full track controls, looping and punch-in recording and essential track-recording functions. This means that you can now compose, arrange, remix, edit and produce complete songs start to finish on the go, anytime and everywhere, with the same level of high-end studio quality found in your desktop/laptop recording, sequencing and editing programs. Just another dramatic turn in the mobile music making revolution!

AmpliTube is fully Audiobus compatible, so you can use other instrument programs like SampleTank, iLectric Piano or iGrand Piano to flavor your mixes with other instrumentation. More about Audiobus in a second, but for instance you can pull up a multi-layer orchestral instrument in SampleTank and play it (and record it) in real time into a track in the AmpliTube recorder. This nifty little feature greatly expands your instrumentation for your compositions and brings all of your favorite instrument apps into one place… your song.

AmpliTube now has a secret weapon called Loop Drummer, that always shows up, is always in the pocket and doesn’t hit on your girlfriend. It’s a loop-based drum module that gives you smokin’ drum tracks to record, jam, and practice with. It’s like having your own session drummer inside AmpliTube — ready to rock out 24/7.

Loop Drummer automatically syncs to the transport of AmpliTube’s recorder, allowing you to record your parts with a solid drum track anchoring the rhythm. In Studio mode, the first track you see at the top of the screen is the “Loop Drummer” track. Here, all your drum parts can be rearranged, deleted or duplicated with simple gestures. And don’t worry — the Loop Drummer track doesn’t take up one of the 8 tracks available for recording. We wouldn’t do that to you.

Loop Drummer comes with a selection of rock loops, and you can easily expand your collection with low-cost in-app purchases from our library of Style Packs. Each pack comes with 64 heavily grooving drum loops, organized in eight different song-sets called Grooves. You can get Style Packs for Rock, Blues, Country, Pop, Funk, Punk, Metal, and Electro. All in all, the Loop Drummer library has over 500 loops in it!

Using Loop Drummer with AmpliTube’s recorder couldn’t be easier. Every time you hit play or record, Loop Drummer follows along perfectly in time. Now you can record full songs with drum tracks, from within AmpliTube. What other guitar/bass multiFX app can offer that kind of power? 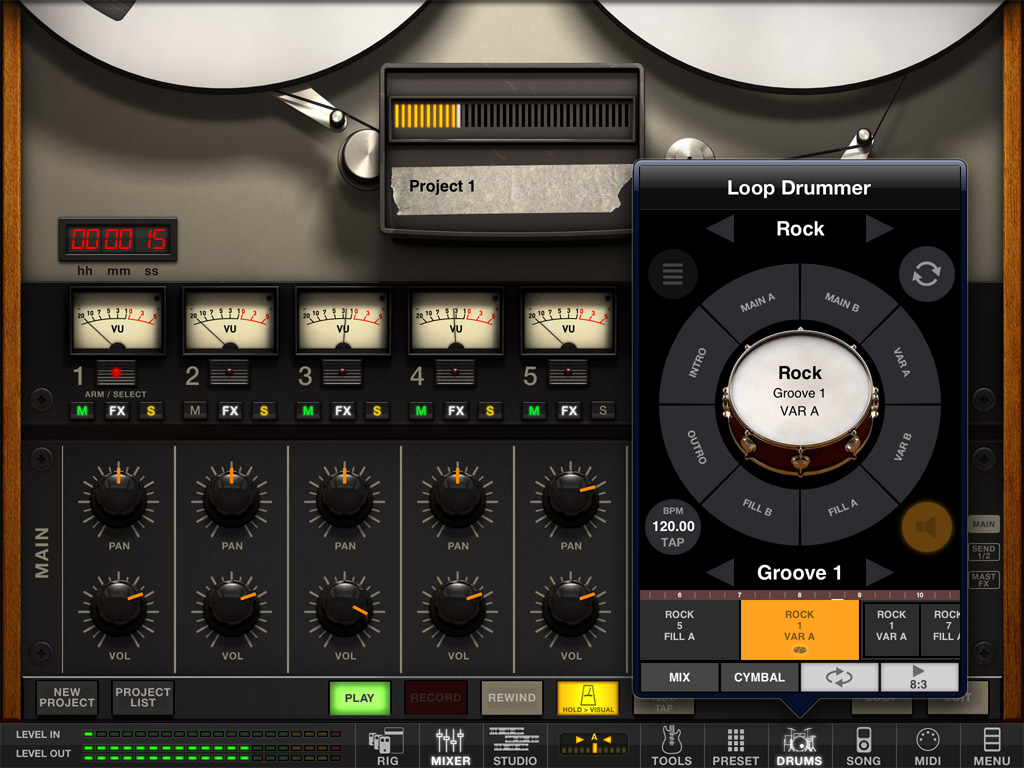 A guitar teacher always with you

AmpliTube iPad also has an extremely cool song player section that lets you import songs or backing tracks, then adjust the tempo (slow it down/speed it up), without changing pitch, to learn licks or just practice your chops. The new NO VOICE vocal-canceling feature allows you to turn off the lead vocal or guitar solo from an existing mix so that you play along with the track yourself.

A chromatic tuner and a metronome are also included so you always play in tune and in time.

AmpliTube for iPad is also MIDI compatible, which means you can use your existing MIDI floor controller to change gear parameters and presets hands-free. What does this really mean? Well, now you can use your existing MIDI controller to “wah”, control volume, add gain, change presets, adjust delay times, and anything else you can tweak on the screen — only without touching a thing. And it couldn’t be easier to use: simply connect your MIDI interface (like our iRig MIDI interface for iOS devices) to your iPad, then connect your MIDI controller to the interface and you are ready to rock.

Hop on the bus

As we mentioned earlier, AmpliTube is Audiobus compatible. Audiobus is a third-party app (not included) that allows for real-time audio routing between up to three apps. Starting with version 2.9.5, AmpliTube can be used in any of the three Audiobus slots — Input, Effects, Output — in the Audiobus chain.

INPUT: Play guitar or bass through AmpliTube’s amp models and effects, and then send that audio on to other apps in the chain. You could even send a Loop Drummer track into the other apps.

EFFECTS: Use AmpliTube’s powerful models and effects to process audio from another instrument app.

OUTPUT: Use AmpliTube to process and/or record the audio coming from the other two apps.