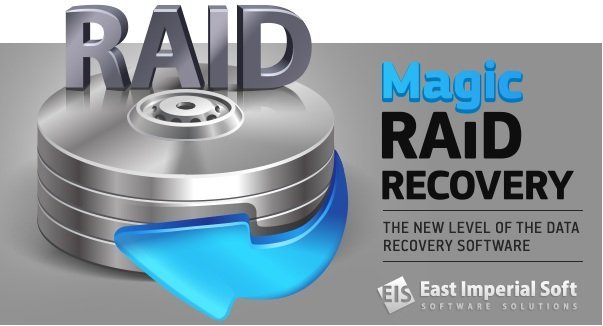 Features and Benefits
Magic RAID Recovery by East Imperial Soft is designed to help users repair many types of corrupted RAID arrays and recover information from single-disk and multiple-disk volumes created in popular DAS and NAS devices as well as a wide range of RAID controllers manufactured by HP, Dell, Adaptec, IBM, Intel, Fujitsu, Silicon Image, LSI, ASMedia, Broadcom, and many others.

Recovering Data from NAS and DAS Devices
• Mount multi-disk volumes and RAID arrays regardless of the type of RAID controller;
• Automatic detection of disk order and array configuration parameters;
• Recover data from logical volumes spanned across multiple disks;
• Recover data from corrupted single-disk volumes and JBOD arrays;
• Extract files and folders from degraded and corrupted arrays without a lengthy rebuild/resilvering (for mirrored or checksum-based arrays).

Recover Data from NAS Devices
Synology, QNAP, ASUSTOR, Western Digital, Thecus, TerraMaster, Buffalo and many other Network Attached Storage (NAS) devices are readily available. However, the limited system resources and restrictive user interfaces of many pre-build NAS solutions may render the data inaccessible should one of the hard drives in multiple-disk volumes fail even for redundant arrays. Magic RAID Recovery makes it possible to save your files and folders by connecting the remaining disks directly to your computer and extracting the data without the lengthy and unreliable rebuilding/resilvering.

Extract Data from Failing and Corrupted Disks
A NAS device is not always about RAID or disk volumes spanned across multiple hard drives. Sometimes it’s just a single disk or a JBOD array formatted in a file system not recognized by your computer. Magic RAID Recovery can help you extract your files and folders by automatically detecting the type of the file system and making the data accessible on your Windows PC. All major file systems used in Windows (NTFS, ReFS, FAT, exFAT), macOS (APFS, HFS+), Linux (Ext2/3/4, XFS, ReiserFS), and Unix (UFS 1/2) are supported.

Partial Data Extraction
Depending on the type of the RAID array, it may tolerate one or more faulty hard drives. However, it is common for parity-based arrays to have another disk fail when recovering from a single-disk failure. You can reduce the possibility of the second failure by using Magic RAID Recovery to quickly recover the data instead of performing the full resilvering. If the second disk had already failed, Magic RAID Recovery will apply complex algorithms to attempt recovering the files that are still accessible on the remaining disks. Needless to say that Magic RAID Recovery will recover 100% of the data if the remaining disks were enough for complete recovery.

Wide Range of RAID Controllers
While many controllers advertise support for the various RAID levels, the devil is in the detail. Manufacturers of the different RAID controllers have their own preferences on how to configure non-essential parameters of the array. As a result, one cannot make assumptions about the stripe size or parity. Magic RAID Recovery supports a wide range of RAID controllers including those built into Intel-based motherboards, as well as those manufactured by HP, Dell, Adaptec and many others, including server models.

Extract Data from Degraded Arrays
From time to time, a NAS device or RAID controller may throw the disk out for various reasons, immediately putting the array into degraded state. In certain cases, re-adding the disk only leads to the same problem repeated after many hours of resilvering. The disk may be perfectly readable outside the enclosure with longer than expected timeouts (which is often the case for SMR drives), or there might be just a few bad blocks not affecting the majority of the data. Magic RAID Recovery allows remounting such arrays and extracting the data without the lengthy synchronization.

Recover Data from Corrupted Volumes
A perfectly healthy RAID might be unreadable because of corrupted file system structures. Rebuilding or resilvering such arrays would be a waste of time, while inaccessible volumes can be repaired by reconstructing their file system structures. Magic RAID Recovery can check the volume and safely extract the original files and folders.

Advanced Manual Mode
Fully automated performance has its benefits, but it has its drawbacks. If you are an advanced user and know your RAID, or if you work in a data recovery lab, you may achieve a higher recovery rate by manually specifying the correct RAID parameters. Should you know only some characteristics of the RAID array, Magic RAID Recovery will help identify the remaining parameters automatically.

What’s new
official site does not provide any info about changes in this version.