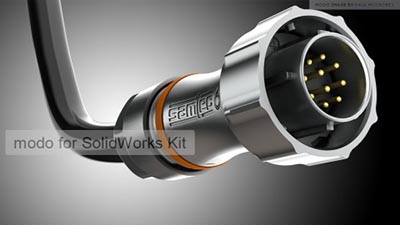 The modo for SolidWorks Kit is for design and engineering visualization professionals wanting to import SolidWorks parts, bodies and assemblies into modo. In modo, you can select imported the data by appearance, part, body or face and create new layers in modo to apply materials to specific parts of your design. The Kit also provides user interface and navigation controls similar to SolidWorks and PhotoView 360.
————————————————– ———————————-
A set of scripts for MODO, to import parts and assemblies in SolidWorks MODO for subsequent visualization. In modo, you can choose to import the data as a whole or in parts, and create new layers in modo, to apply the materials to specific parts of the project. The kit also provides a user interface and navigation similar to SolidWorks and PhotoView 360.