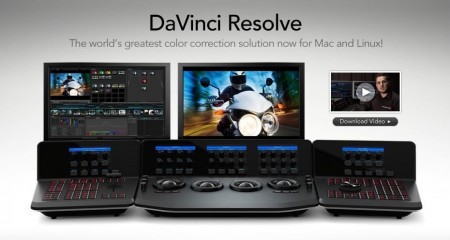 Hollywood’s most powerful and creative color correction! DaVinci color correctors have been the standard in post production since 1984. There are thousands of colorists worldwide who understand the performance, quality and workflow of DaVinci. DaVinci is the name behind more feature films, television commercials, documentaries, television production and music videos than any other grading system. When you’re in a room full of demanding clients with conflicting ideas, colorists know that only DaVinci has the quality, real time performance, creative features and powerful control panel you need to work fast! You can upgrade DaVinci Resolve as you grow!

Unlimited Creativity
DaVinci Resolve uses node based image processing where each node can have color correction, power windows and effects. Nodes are similar to layers, but more powerful as you can change the connections between the nodes. Join nodes sequentially or in parallel to combine grades, effects, mixers, gaussian blurs, keys and custom curves in any order for mind blowing creativity. You can reconnect nodes in any order for all types of exciting and cutting edge creative looks.

True Real Time
Computer based solutions are normally limited to a single GPU or a single computer. DaVinci Resolve smashes this limitation because it lets you add extra GPU cards or even clusters of multiple computers for super computer power! This means you get the real time performance you need when you’re in a room full of clients. Add dozens of primaries, secondaries, power windows, multi point tracking, blurs and more. Then just hit play, it always works!

Unique YRGB Colorspace
All image processing is at the deepest 32-bit floating point YRGB so all corrections are always operating at the highest bit depths in real time. Deeper bit depths combined with YRGB colorspace mean you get dramatically wider color correction range and can generate ‘looks’ that simple NLE color correction cannot match. DaVinci’s YRGB processing means you can adjust the luminance gain without rebalancing the color of your whites, mids or blacks so you’re not chasing the correction you’re aiming for!

Optical Quality Processing
DaVinci’s high quality image processing is so revolutionary it won an EmmyTM award for contributions to the television industry! All image processing is at the deepest 32-bit floating point and the unique DaVinci correction algorithms mean you get a more optical feel to corrections. When pushing grades, whites blow out in a more subtle and delicate way without the horrible clipped look. Then, when you need to resize, reposition or zoom any shot, the full quality is retained and all in real time!