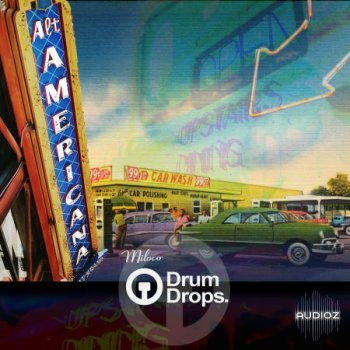 With over 300 loops and 50 one-shot samples Alt Americana is an encyclopaedic journey of grooves from early influences such as The Band, Gram Parsons and Van Morrison right up to modernity of the Kings of Leon, White Stripes and The Raconteurs. Beautifully recorded by Julian Kindred at his world class private studio, this collection ranging of beats with tempos ranging from 77-164bpm will give your tracks that authentic live feel and swing that will truly elevate them to the next level. We truly hope you enjoy this pack as much as we all loved making it.

Dan See is a UK-based session drummer with a wide range of recording, writing and live experience. Currently he is working with Lianne La Havas as part of her live band and can be heard on her self-titled album Lianne La Havas. Other work includes recording and touring with Sir Tom Jones, Laura Marling, Jamie Woon, Nick Mulvey, Nao, Lexxx and Ethan Johns.

Julian Kindred is a Canadian producer, engineer and songwriter who has made numerous records with a wide and varied range of artists for over 20 years. Raised in a musical family, he took up keyboard and guitar, developing his craft and love of arranging. After doing his first recording session at the age of 15, and inspired by the records that moved him, he soon became obsessed with another craft – record making!

Julian’s work has won two Grammy awards as well as garnering six Grammy nominations. He is passionate about maximising the creative recording ambitions of those who work with him. Whether it’s making a track as bare as possible to allow a beautiful melody to shine through, or combining disparate influences in the hope of concocting unique musical and sonic results, he is constantly pursuing new ways to achieve artists’ vision, while drawing from a rich history in the recording studio.