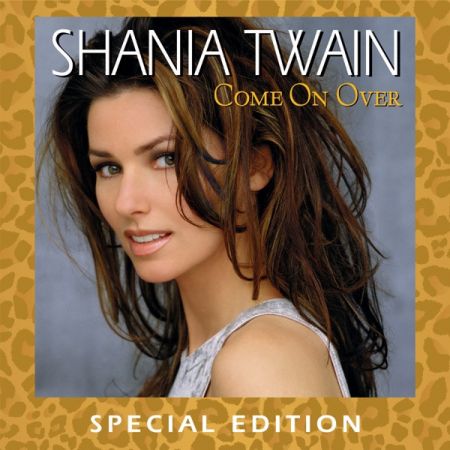 Shania Twain’s second record, The Woman in Me, became a blockbuster, appealing as much to a pop audience as it did to the country audience. Part of the reason for its success was how producer Robert John “Mutt” Lange — best-known for his work with Def Leppard, the Cars, and AC/DC — steered Twain toward the big choruses and instrumentation that always was a signature of his speciality, AOR radio. Come on Over, the sequel to The Woman in Me, continues that approach, breaking from contemporary country conventions in a number of ways. Not only does the music lean toward rock, but its 16 songs and, as the cover proudly claims, “Hour of Music,” break from the country tradition of cheap, short albums of ten songs that last about a half-hour. Furthermore, all 16 songs and Lange-Twain originals and Shania’s sleek, sexy photos suggest a New York fashion model, not a honky tonker. And there isn’t any honky tonk here, which is just as well, since the fiddles are processed to sound like synthesizers and talk boxes never sound good on down-home, gritty rave-ups. No, Shania sticks to what she does best, which is countrified mainstream pop. Purists will complain that there’s little country here, and there really isn’t. However, what is here is professionally crafted country-pop — even the filler (which there is, unfortunately, too much of) sounds good — which is delivered with conviction, if not style, by Shania, and that is enough to make it a thoroughly successful follow-up to one of the most successful country albums by a female in history.