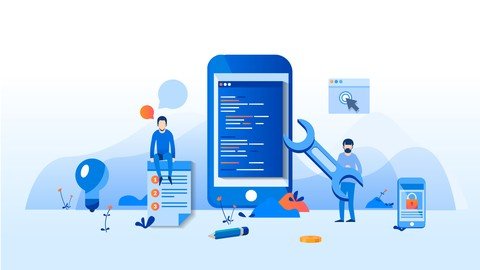 Requirements
Prior programming experience of JavaScript is assumed.

Description
React Native is a JavaScript framework that lets you build native apps for both iOS and Android using a single language. A React native app is not a hybrid app so it’s indistinguishable from native apps built with Java and Objective-C.
React has taken the web development world by storm. It’s only natural that its unique architecture and third-party support ecosystem is applied to native application development. Using JavaScript, you can build an application that renders native UI components and accesses native device functionality.

This comprehensive 3-in-1 course is a step-by-step tutorial to building dynamic apps for iOS and Android with React Native. Design and build a fully-featured application using the newest features of React Native. Create increasingly complex real-world applications and explore React Native in depth.

This training program includes 3 complete courses, carefully chosen to give you the most comprehensive training possible.

The first course, Learning React Native Development, covers developing dynamic and stunning native mobile apps for Android and iOS using JavaScript. Delve directly into React Native to build native mobile apps. Develop apps that are fun, unique, and responsive with React Native. Learn React Native fundamentals to build interactive and user-friendly apps. The course aims at teaching you React Native irrespective of the underlying platform so that you can learn once, write anywhere.

The third course, Publishing Your Application with React Native, covers creating impressive applications using the different tools of React Native. In this video, you’ll start with a look at state management and how to keep your code usable by other developers, how to build for your ideal user, how to create animations that pop, and how to publish your apps to the App Store. With the core UI built, we can take off our designer hats and focus on creating code that is clean and easy to reuse.
By the end of the course, you will have created your own application using React Native and learned to publish your app in the App Store and Play Store.

By the end of the course, you’ll create and publish impressive applications using the different tools of React Native.
About the Authors
MiftaSintaha is a big enthusiast of new web technologies that are out there to make everyone’s life easier. She is a Software Engineer, a Tech Lead, and a content creator in YouTube where she authors various concepts in Computer Science and MEAN stack frameworks. Her ability to simplify the explanation of complex topics is what enhanced her popularity in YouTube. She has over 4 years’ experience in working with frontend frameworks such as Angular and React, and backend frameworks such as Express.js and Django. Get the opportunity to learn how to write production-ready code with her courses.

Find out more about her tutorials at her YouTube channel: MiftaSintahaCS

You can also look at her work on GitHub @msintahaAlvaro is a professional React Native developer with an interest in mobile technology, server-side API development, and iOS development. He plays bass in a rock band, and he enjoys road bikes and politics. The first thing he started programming was little buy scripts for Counter Strike. These were small hacks to buy faster and pick up all the necessary equipment. A few years later, he went to the University of Balearic Islands to study computer science. There he began to learn the fundamentals of computer programming using Ada, C, and Java. After finishing his B.Sc. in Computer Science, he started his M.Sc. That was when he started to do really fun things such as games in Lisp, creating a compiler of a subset of Ada instructions, and computer vision with OpenCV, among others. Before finishing his M.Sc, he started to work full-time, first as a developer for the hotels team at Logitravel (the second tourism dot com in Spain) and currently as an iOS developer at mola. He had no previous iOS or mobile development experience before entering mola, but he successfully managed to develop both server-side and mobile apps for a social network called Hoods. He also helped the awesome team at Mola in several other projects (Matchball, Zoco). Right now he is a mobile developer at APSL—Advanced Programming Solutions—and works on several products.